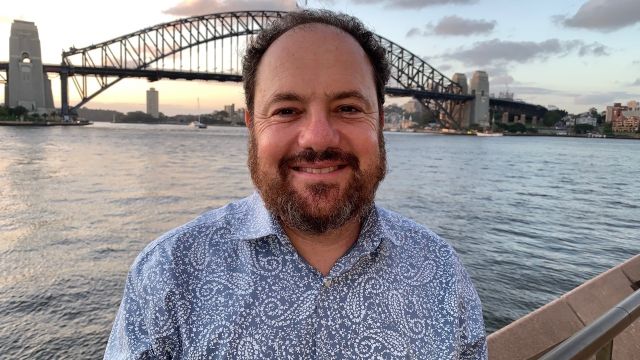 David Spicer was a long shot at getting a role in the now cancelled season of Fiddler on the Roof in Yiddish. He reports on the joy of  growing a beard and learning tongue twisters for the audition.

In March I reported in the column Musical Spice - which is usually at the back of Stage Whispers -  that I was about have an audition for Fiddler on the Roof in Yiddish. The suspense has been killing our regular readers. None of them have been have been talking or tweeting about COVID-19, but how my audition went?

To recap, Opera Australia and John Frost were planning to stage A Fidler Afn Dakh - in the original language spoken by the good folk of Anatevka - later this year in Sydney and Melbourne (until the Coronavirus wrecked everything.)

I was a long shot to be in a musical (doomed to be cancelled), but with experience in synagogue choirs and a gig (a long time ago) in the chorus of a professional opera, I scored an audition.

Less than a week out I came down with the flu. Not the coronavirus, but a good old-fashioned sneezy croaky cold. Oi vey – my big shot at performing at the Sydney Opera House was about to be coughed away. I dosed up on chicken soup.

Everything else in my life was turned off as I focussed on the looming audition. My two-month old beard was well sprouted. Singing coaching, a dance lesson and drama critique was sought.

Day and night, I recited my lines in Yiddish – even whilst driving the car. I drove my family nuts by mouthing the words.  Un di tsvey laykters. Zilberne Zilberne (And the two candlesticks. Silver Silver).

Learning Yiddish takes at least three times as long as English. Nothing would stick on the first day. Only after sleeping on it would words sink in. I learnt a wedding MC speech and two songs. Sabbath Prayer was sweet, whilst The Rumour has hilarious tongue twisters including: Sprin-tse pokt un Mozlt (Sprintse got chicken pox and measles).

My cold cleared and the day arrived. I was going to enjoy my first (and probably last) audition for Opera Australia. In the dance studio waiting room I perused the competition - mainly men aged in their twenties, auditioning for Motel the Tailor. This was a good sign, as there were only two other middle-aged men and they weren’t Jewish like me.

Some of the auditionees were in meditation-like trances as they went over lines with headphones on. One told me he worked in catering - another was an usher. A bit sad that these highly intelligent and highly trained men had low paid jobs, which didn’t require their talent.

“David Spicer” announced the assistant. In I walked - gulp. There was a row of men and women sitting behind a table. The director said he didn’t want to hear Sabbath Prayer (well that was a waste learning that song) but could I sing The Rumour.

I nailed it! Yeeha. “Your movement is nice but can we have it again but louder?” said the American director. I can do loud I thought. Again, I nailed it.

Next the speech at the wedding, unveiling the gifts. They smiled at me. I felt good. Thank you for learning Yiddish and growing a beard, one of them said.

Out I walked. “David are you available for a dance call back in an hour?” Yes, I might be able to fit it in. I felt triumphant. Now how do I disguise my rather primitive dance skills?

Into the room we all marched. The friendly choreographer divided us into three lines - character parts (middle-aged men), boys and dancers. He said something which made me cheer. In Anatevka there are no dance schools – goodness, maybe I have a shot at this after all. We all learnt a simple routine to the song Tradition. It was fun and I was beginning to taste the spotlight at the Sydney Opera House. Maybe I should start preparing my speech for best new talent at the Sydney Theatre Awards.

Then he said something which made my heart sink. “In this production there are only 26 in the cast, which means everyone has a lot to do, whereas there were 35 in the cast in the US.”

All the middle-aged men were asked to leave. I did the maths in my head. 26 in the whole cast? Take out 13 principals, four or five bottle dancers, mothers, sons and daughters, plus an understudy for Tevye etc - this meant I was competing for two or three non-principal middle-aged male roles.

There was no way I was in the top three from all those seasoned professionals who auditioned in Sydney and Melbourne. Maybe if there had been a substantial male chorus, like other operas, I might have snuck in. Another auditionee in my round who was not Jewish, but had a louder voice, got a further call-back.

I waited by the phone – no-one called. I shaved my beard off and relaxed. They usually say don't call us we'll call you. Nothing about don't call us until you hear about the press release announcing the season is cancelled due to a pandemic! It is disappointing all round. For the cast who did get in, for the audience and Opera Australia which was set for a cracking year.

Let's hope that in a few years they can schedule it again - so I can have another crack at an audition. That will make it a tradition.