Shrek - New Show on the Block 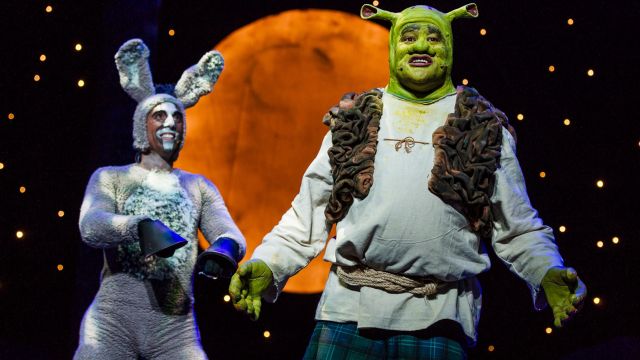 Shrek the Musical had a $25 million budget on Broadway. Now community theatres are staging it in Australia. The creatives from Packemin Productions in Sydney, who staged the musical in February, describe how they dressed the stage.

"I saw the Broadway production in 2009, and while I loved the show, I felt it was over-produced by DreamWorks,” says Co-Director Craig Stewart. “They obviously wanted a large expensive spectacle, but for me that got in the way of the storytelling. Bold lines and bold colours would define the fairytale world of our Shrek.

"An example of this character driven design is in The Dragon. In the Broadway production it was a large animatronic head that lip synced poorly to mostly unseen voices, and was rolled around the stage without any presence of its own.

“We decided early on that we would have the actress singing the role. Her attitude and attributes sell the Dragon in a way a puppet alone cannot and also allows us to ground the character for the audience. Brilliant dancers puppeteered the separate pieces of The Dragon, injecting vibrancy into the character."

Co-Director Jessica Fallico says, “Our costume and make-up departments went above and beyond to put this show onto the stage. We have thirty-three fairy tale creatures alone in our ensemble, all with unique and beautifully crafted costumes and make-up that define these characters at a glance. 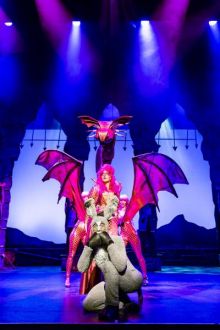 “Our ‘Shrek' makeup had four trials until it settled into a beautiful likeness to the animated Shrek we all know and love for the stage. The make-up takes over an hour and consists of a cowl, four latex moulds for Jay’s forehead, cheeks and nose, and of course lots of green face paint.

Set Designer Josh McIntosh says, “I wanted to give the whole set an illustrated cartoon feel, influenced by pop-up books, rather than replicate realistic castles and forests.

“The face of Lord Farquaad was digitally printed onto banners. The big mug of his face on fabric represented his narcissism, to decorate the town with images of himself.”

Stage Whispers’ David Spicer thinks the most inventive scene in this production was a set piece where Shrek, Fiona and Donkey are travelling.

“I drew the landscape, coloured it on photo shop then had this printed onto a 20 metre curtain that rotated.”

An extra touch was LED lights at the base of the set piece.

However the effect that got the best response from the audience was as old as the hills. To miniaturise Lord Farquaad, he walked around on his knees and had mock legs pinned to the top of his pins.

Packemin Productions set of Shrek the Musical is available for hire. http://www.packemin.com.au/

Originally published in the March / April 2018 edition of Stage Whispers. How do Women Directors Get a Greater Share of the Chair?
Why are women directors in film and theatre still in a minority? Studies show that half of all film school graduates... more

Shrek - New Show on the Block
Shrek the Musical had a $25 million budget on Broadway. Now community theatres are staging it in Australia. The... more